Maybe you heard of this – a pudgy Australian kid was getting picked on by a classmate. So what does he do? He fights back. Now, I know your not supposed to condone violence and fighting isn’t the answer etc. But I think the Penny Arcade comic pretty accurately sums up my opinion on the situation. 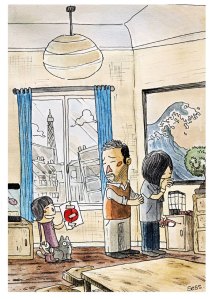 Casey may be a hero for every quiet angry kid out there, but here’s a hero for every person: Hideaki Akaiwa, who saved his wife and mother from the tsunami, and is working to save other citizens even now. Go read Baddass of the Week‘s rendition of the event. It doesn’t sound real, but it is.

Going back to artists helping Japan, a friend sent me a great site, called Tsunami, with a collection of drawings showing support for the country. According to an English portion of the site, these drawings will go on auction in Paris to raise money for quake victims, and there will be a book later this year. Some of them are really amazing, and a little heartbreaking.

The Oxford English Dictionary has announced that it’s adding new words, and I feel that the death of the English language is imminent. Among the words being added are FYI, LOL, OMG, and <3. No, I’m not being cute, they are adding the symbol <3. Really? Yes, I’ve used that symbol before, but not as a serious piece of grammar! Conversely, I’m totally fine with “muffin top” now being a real phrase.

In less depressing news, looks like the Sailor Moon manga is getting a rerelease from Kodansha USA this year, along with the prequel Codename: Sailor V.  Neither the anime nor the manga was something I ever got really into, but since it will be published in omnibus for I’m interested in seeing what I’m missing. And since someone I know is working on the book, I’m doubly excited.

Pokemon Black and White have been out for a little while. I haven’t bought either one, since I never beat Pearl and would feel guilty slapping down another $50. But that doesn’t mean I’m not still interested in Pokemon rights, as you should be as well.