I have no idea what to do with myself. And while I wait for my epiphany, I feel the toxins collecting in my body.

by Inio Asano in one of those itty-bitty Animerica magazines crammed on the end of the anime aisle in Best Buy. The first few pages were given as a preview, and I was intrigued by the characters, so when the manga came out October 2008 I picked it up. 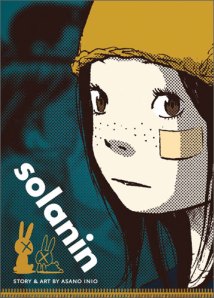 The release of this book was pretty timely. Earlier that year I had graduated from college (completely against my will, I might add). I had once imagined that upon graduation I would know exactly where I was going in my life, that there would be a plan, a path, something I could easily settle into and be happy with. Then the day came, and I discovered that the little piece of paper did not include a map for my life. I was on my own. I was totally screwed.

I found myself settling for a job that I did not like, that I did not want, but it was easy, and what else was I going to do? I knew I wanted to write, but how was that going to happen? I found myself getting sad a lot as I dug my rut deeper and deeper, the sides getting so high it was becoming increasingly difficult to pull myself out.

Meiko, the main character of solanin, finds herself in this rut, too. Recently graduated from college, she works in a boring office. Though she is technically an adult, she doesn’t seem to see herself that way, always referring to others as “adults” and “grownups” as if she isn’t part of that group. When she hits the end of her rope, she decides to just quit her job, and see where life takes her from there. This turns into a lot of her doing nothing, but she starts to ask other people the questions, “Are you happy?” “Are you satisfied with your life?” and finds out that no one really is, at least not all of the time. 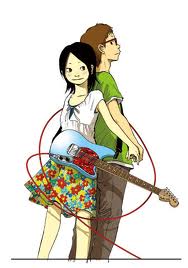 I read solanin in one sitting. When I was done, I sat there, trying to sort out my reaction. The manga left me with a strange mix of feelings. First there was the good: solanin was a sort of revelation for me, that I was not the only one stuck in a rut, afraid to move, feeling slowly poisoned. I wasn’t the only one who couldn’t see herself as an adult, even though by all definitions I was. That horrible, disconnected, paralyzing feeling — I wasn’t alone in it.

solanin also made me feel horrible. Even though the manga made me feel relaxed knowing that other people feel this way, by the end it offers no real solution to figuring yourself out. As Meiko prepares to move out of her apartment and start a new job, a friend says to her, “Bet you won’t be able to stand it, and you’ll quit again.” Not only does she not deny it, she treats it as truth — she won’t be settled, she won’t have figured out what her happiness is.

But what upset me the most about this manga (there’s a spoiler in this paragraph, FYI) concerns Meiko’s boyfriend, Taneda. Meiko begins to push Taneda to take his band seriously again, and after being egged on he decides to go for broke — he’ll send a CD out to every record company and see if someone bites. If not, he’ll quit for good. It sounds inspiring… but in the end he fails, with the only company that responds asking them to give up their pride. After a disappearance, Taneda decides to go back to his old boring job, and back to living with Meiko. He tells himself he’s happy… until he realizes that he isn’t, and shoots on his bike past a red light into traffic. I understood Meiko’s disconnectedness, but I related the most with Taneda’s need to create his music, and his fear that if he tries to hard, he’ll only fail. I rooted him on, and when he literally crashes, well, that just made my chest tighten right up.

I didn’t get any sort of epiphany from solanin. Instead it was more of an affinity — I didn’t just relate to these characters, I WAS these characters, trapped, confused, unsure of how to move forward. The best thing solanin did for me was point out that I wasn’t alone, that I wasn’t actually failing just because I didn’t know where my life was supposed to go from here. It also reminded me that even when your lost, you can’t just stand still: after Taneda’s death, Meiko ends her months of wallowing by picking up his guitar and deciding to join his old band. Music isn’t her dream, not like it was for Taneda, but it becomes something for her to do, to focus on. She finds a long sought-after connection, and even if it’s not necessarily moving forward, it’s still moving, which is better than sitting round letting the toxins collect. It may have filled me with an undefinable feeling (friends I lent it to didn’t fare much better, returning the book with an uncomfortable look on their faces) but I’m glad I read this manga at the time I did.

This post was written as part of the Viz Signature Manga Moveable Feast, hosted by Kate Dacey on The Manga Critic.

One thought on “MMF: solanin and That Horrible Disconnected Feeling”